A tuple consists of a number of values separated by commas, for instance:

They may be nested

As you see, on output tuples are always enclosed in parentheses, so that nested tuples are interpreted correctly; they may be input with or without surrounding parentheses

else it doesn’t create a tuple

empty tuples can be created without a comma

this is also the same with an empty list

Access items by referring to the index number (starting from 0)

Negative indices start from the back and in the reverse

An optional thirs argument (the step) can also be specified like

Here we gave a step of 2 so it starts at the 0th item and returns every 2nd index until the end.

In reality no-one really uses slice as there is a shorthand for it: The colon :!

remember slices are up until (NOT INCLUSIVE) of the end index

A side note on range

We have used range a few times. It is worth pointing out that its arguments operate in exactly the same way as slice. Except, instead of returning an index slice, it returns actual index values as a special range object.

A list is a collection which is ordered and changeable. In Python lists are written with square brackets.

Lists are indexed in eactly the same ways as tuples

We have already encountered .append. There are also other additional things with lists as we have extra methods available, some are shown below

if no argument is provided it will pop -1

pop will also remove that item from the list

Example: A common misunderstood feature with the python list

Though tuples may seem similar to lists, they are often used in different situations and for different purposes

*Immuatable object types like tuples cannot be mutated by assignment

*Mutable object types like lists can be mutated by assignment

A brief foray into c

Python was concieved as a scriptiong language built on the more low level language c. In c, programmers must be more-so aware that variables are simply link to memory address locations (Ever heard of RAM?). The random access memory (RAM) is where all these variables are stored. Conceptually imagine it as a big list with numbers assigned to it

*whilst keeping the memory address of the container the same

Whereas with the tuple

*the address changes when it is mutated

If the variable is assigned to another variable, the variable points to the same address location which can be seen by

However, if we then change the address location of the original variable we break the link!

Whereas with mutable types like lists this reference persists!

A slice, will create a copy of a list object to a new address location. A blank slice will also do this

For a more detailed overview of how exactly this works check out https://realpython.com/pointers-in-python/#immutable-vs-mutable-objects

Numpy arrays are exceeedingly important to your future career as a python expert! They offer a way of doing optimised mathematics on lists.

The need for numpy arrays

Take the following as an example:

Note that we can’t simply multiply a normal list and expect its elements to be doubled! The example below is expected behavour.

Think of a list like an object e.g. like an apple. If you multiply 10xApples you don’t suddenly expect 10x the number of seeds and one apple. As with the 10 apples you should expect 10 lists.

Compare to the numpy solution

In fact we can use np.arange to further simplify

Not only is this more concise, but numpy uses optimised C++ libraries that are incredibly difficult for humans to beat in terms of speed. Thus all operations we can push to the C++ part of numpy are as fast if not faster than some seriously intense C++ code (As a reminder C++ is a very fast language and what most core quant pricers are written in as a result)

As an example you may have a look at this numpy module which does matrix multiplication (note matmul is actually arr * arr.T not arr * 2) this will call a library called BLAS if possible which is a highly optimised linear algebra module written in Fortran and C++. In a nutshell: Goodluck at writing faster code than the authors of BLAS routines.

Iteration and indexing in numpy

Iteration and indexing in numpy are somewhat funky and this can make newwer users veryu confused between list and numpy.array iteration… I will try to not confuse you by making explicit what is specifically only allowed in numpy and what is allowed in list objects as well

All normal list indexing tricks can be used on numpy arrays

This will not work in a normal python list!

This works because solely because

as a comparison see what happens when we do

similarly we could do (remember the bitwise logic?)

Whereas a similar statement won’t work with lists

Confusingly, we can actually use a raw list to index a numpy array in fact we can use both list and tuple

How do we achieve this in practice?

This exercise is to help you understand iteration across more than one dimension.

Find the trace of the matrix a. The trace is defined as the sum of all the diagonal elements (this is 14 from visual inspection).

Hint You may also want to play with

recalling how multiple variable assignment works. Google may be your friend here!

This exercise is to expand on the previous example with a bit of quantitative finance (Don’t worry though the maths will all be solved out for you!).

Here you will be guided through a monte carlo stock price model using Geometric Brownian Motion. You will also show that the returns from a GBM model follow a normal distribution.

This exercise is intended to be partcularly challenging and may require some googling but don’t give up - 99% of coding is being frustrated and feeling stupid… I sort of didn’t tell you that when you signed up haha!

Modify your previous example to the brownian motion exercise so that you store the results in a list named path while the stock price is greater than 0. Set path_len = 504 (i.e. 2 years) and only run for this many time steps.

Use the same values for dt = 1/252, sigma, mean etc that you used before, some (not all) are shown below

as a check you should get the following

Hint Just use plt.plot nothing fancy! 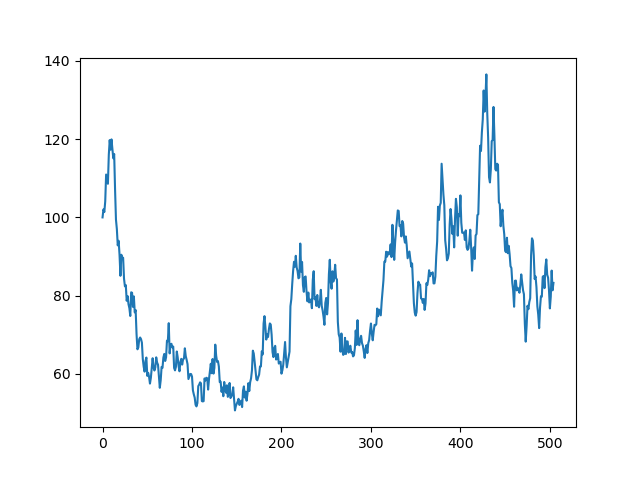 In Exercise 9.2.1 you simulated a single path of a stock using GBM. Now create paths_num = 1000 paths and store each of these paths in another list named paths

Hint paths will be a list of lists & you will require two for loops. I have declared the empty list for you to fill below and to help you on the way I have done the first loop… You will need to finish the code off by adding another loop and the formula for caluclating $s_t$.

Lets restrict this time to one year of simulation to save our CPUs.

Plot all 1000 paths with pandas using dt as the index. This is a little more involved so read carefully!

To store in pandas we need to transpose (swap round the referencing) so that in the above example we would change paths[m][n] -> paths[n][m]. This is the same as transposing in Excel.

You can do this with a few different options

For sanity would should also probably make the index match the timesteps we are using. Lets create a proper index.

Now create the DataFrame with this index. Google if you get stuck.

Make sure that you can pass this test! If you can’t think about the order in which you created the index and then transposed the DataFrame

Now plot with the default pandas plot function. Make sure to pass the argument legend=None! 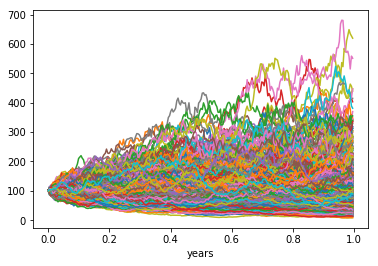 Prove that the 1-step stock returns are normally distributed under the GBM model by fitting a Gaussian distribution to the probability distribution function of the 1-day returns - Don’t worry it’s not as hard as it sounds :)

You will need to calculate 1-day returns. You have two options for this:

e.g. if using years you want to be using a unit of $\Delta t$ that is roughly 100th of a year or smaller

You should get the following as a check

This isn’t so much of an exercise but simply a check for the previous exercise to ensure you have it correct! The maths isn’t too important. If you like, you can ignore it all and just run the code below. You should expect differences less than 1% if you have it correct

Without proof (see here for one) we state that the n-day returns, $R_n$ follow a Normal distribution

Lets take as a fact that we can model a probability distribution function (how likely an event) by using scipy.stats.norm.fit. Then the following snippet of code will confirm your results with theory as a check

This exercise isn’t so much an exercise rather than an example of how to resuse a matplotlib axis object to draw another line. 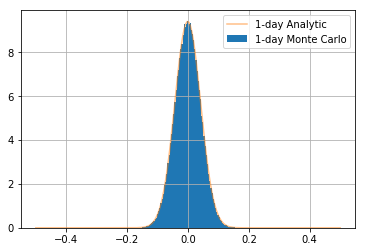 Note that this exercise is really aimed at structurers, derivatives traders and quants - if you haven’t studied stochastic calculus at university then just ignore this question or ask a quant if you find it interesting 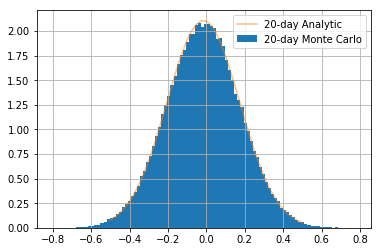